Ophiuchus: The Only Reliable Astrological Explanations On The 13th Zodiac Sign

Your life and whole existence might be about to change thanks to the discovery of the 13th zodiac sign, which is known as Ophiuchus. This revolutionary discovery falls between Scorpio and Sagittarius in the zodiac and has just made the astrological field even more interesting! This exciting revelation could potentially change the way you view your personality and for some of you, it may even change your original sun sign. Susan Taylor reveals all the essential information you must know, including its dates, character traits, essential facts, and meaning.

The 13th zodiac sign is a truly amazing astrological bombshell and deserves its moment in the spotlight. In 2016, NASA updated the horoscope signs, which led to the 12 signs becoming 13. Indeed, our zodiac signs play a crucial part in our lives, and it’s fair to say that since Ophiuchus’ introduction, things have truly been spiced up and plunged into the unknown, this is where Susan Taylor comes in to explain what we need to know and whether its discovery changes anything.

This sign hasn't been recognized like the other traditional sun signs, meaning nothing will change for you, even if you were born between November 29 - December 18.

Ophiuchus is in fact the thirteenth zodiac constellation, however it doesn't appear in traditional astrology. Western astrology doesn't take the constellations into account and instead focuses on twelve sectors that the Sun travels through in a year. Although, its existence is more a subject of media hype and sensation than actual astrological fact. Astrology isn't based on astronomical constellations, meaning the signs remain unchanged. This means our Scorpio and Sagittarius friends can relax because their signs remain untouched. Find out from Susan Taylor; can your zodiac sign change?

This profile falls between Scorpio and Sagittarius, which means the Sun passes through it from November 29 to December 18. If you were born between these dates, your world is about to be turned upside down because you are officially a native of the 13th zodiac.

Ophiuchus people are known for their intense curiosity, openness, passion as well as their jealousy. More of their personality traits include having a fabulous sense of humor, an eagerness to learn and above average level of intelligence. The Ophiuchus zodiac sign is also very attached to family life and dreams of living happily ever after in a home full of love.

What does Ophiuchus symbol mean?

The 13th zodiac sign is depicted as holding Serpens Caput in his left hand and Serpens Cauda in his right hand. The serpent bearer symbol is said to represent strength, courage and bravery. 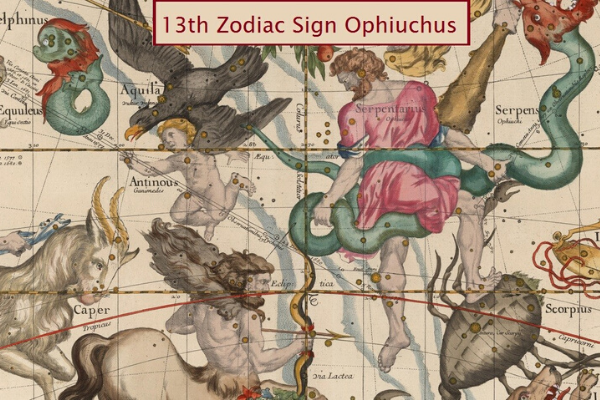 Just as Leo is represented by a lion and Pisces by the fish, this sign represents fearlessness and nerve and these values are reinforced by its symbol, which is a man holding a snake.

What are the 13 zodiac signs and their best and worst traits?

Unfortunately, the latest arrival hasn’t yet been assigned an element, but based on personality traits, the explosive Ophiuchus sounds like a fire sign to us. The zodiac elementsinclude Fire, Earth, Air and Water and each zodiac sign belongs to a particular group and shares the element's own characteristics. Indeed, the elements influence our strengths, weaknesses and attitudes.

Where is Ophiuchus located?

It can be found between the constellations Aquila, Serpens, and Hercules. It's located south of Scorpius the Scorpion and to the east of Sagittarius. In the Northern Hemisphere, the constellation is invisible to the naked eye, which explains why the Babylonians and Ancient Greeks believed there were only 12 constellations.

It's time for you to check out more of our great content:

Hi how do i have pronounce my new horoscope.. Ophiuchus plz

The 5th element. The twelwe and 1 jesus. The healer, the preserver of life, as opposed to the creator and the destroyer.Brahma Vishnu Shiva. 1. The all The one 2. The duality brings about all that is 3. The creation destruction preservatio.forces we are trying to juggle 4. The 4 faces of the angels POWER. JUSTICE. WISDOM. LOVE in perfect ballance. 5 ? You answer here

I think Ophiucus is Earth sign. Powerful and Stern.

Ophiuchus is returning the 5th element of Ether back to Earth’s planetary system, so natural order is able to be restored back to the true organic ascension timeline, thus releasing all organic living life forms on, and including, Earth, from the malevolent implementation of artificial, anti-life timelines. Ether is the transmutational catalyst needed for all life to transition to a higher state or form. It is said to be a mix of fire and water. Just as ether is a source for all others, so too is Ophiuchus.

The black tiger is almost ready to make his move. He is currently blind. He is R, and she is S. He does not know who she is. Together we will rid our galaxy of the demon star.

She is too ready, but it's relearning to hear.

What does it mean to be born under a dark star?