Recent revelations and debates have brought about questions such as, ‘what if you are not the zodiac sign you thought you were?’. To explain why, a 13th zodiac sign also known as Opihchus has made its entrance into the world of astrology and falls between Scorpio and Sagittarius causing a potential shift in signs. Are you impacted by this new sign? Susan Taylor reveals why people are suddenly wondering if their astrological bases have been modified and if your zodiac sign can change.

Every year articles on the new astrological sign appear and reveal that you are no longer be the sign you thought you were. They also evoke the appearance of a new 13th zodiac sign; Ophiuchus. 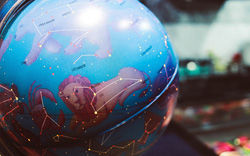 For our Astrologer; Susan Taylor, this debate is irrelevant because astrology doesn’t use astronomical constellations to develop themes but on the zodiac itself.

Just like magic, a thirteenth zodiac sign known as Ophiuchus seems to have come out of nowhere to steal the show. A group of American researchers explained that the Earth and the Moon have shifted since the beginnings of astrology, meaning today’s calendar is completely distorted. Although, this is nothing new for the age-old astrology/astronomy debate!

The "precession of the equinoxes", i.e. the change of direction of the earth was discovered in 130 B.C. by Hipparchus. Since then, the subject has been at the center of debates among detractors and Astrology enthusiasts. Astrologers have known about it for a very long time but this does not change anything in their work since the astrological wheel is not based on astronomical data.

Am I going to change my zodiac sign? - No, nothing is changing

This "precession of the equinoxes" doesn't change anything for you! The Aries sign will always be an Aries and the Aquarius sign an Aquarius... Indeed, if the 12 zodiacal signs are named after the constellation that corresponded to them when the zodiac was established, the zodiacal astrological sign is and always has been the seasonal representation of the Sun in our terrestrial situation.

The zodiacal sign, called Tropic, has no relation with the constellations of the starry sphere, which means that it is not affected by the phenomenon of precession of the equinoxes! This theory of the thirteenth zodiac sign, is therefore completely crazy. Astrology does not rely on constellations to elaborate a theme.

When the Babylonians codified astrology somewhere around the middle of the first millennium B.C., they chose, for obvious practical reasons, to arbitrarily divide the celestial belt that is the zodiac into twelve equal portions of 30 degrees (which makes 360° in total). In doing so, they took Ophiuchus out of the game - perhaps because it does not have very visible stars - and they did not take into account the true surface area of the constellations. Thus, if we had to stick to astronomical reality, the sign of Scorpio would only last one week, because that is the time the Sun spends in this constellation while it transits for a month and a half in Virgo...

How were the astrological wheel and the 12 signs of the zodiac drawn up?

In ancient times, the zodiac was defined from the vernal point (0° Aries). Thus, the 12 zodiacal signs were named on the basis of the fixed stars as seen at the time. Since however, the vernal point started moving under the effect of a very slow conical movement of the earth's axis of about 1° in 72 years, every 2160 years there is a shift of one sign between the zodiac and the constellations.

The 12 zodiac signs and their traditional names are therefore only a practical, simple and effective way to locate the position of the earth in its orbit around the sun. In this tropical zodiac which has no relation with the constellations of the starry sphere. 0° of the ram corresponds to the spring equinox and our 12 signs are 12 regular sectors of 30° which are distributed in a year of 12 months according to the seasons.

Thus, each of the 12 zodiacal signs are 12 analogical reference points 12 periods of the year/seasons. May the rationalist minds learn to live serenely with Lady Astrology who speaks to man as the myths speak to the whole universe.

'All this information has been known for a long time and NASA has neither invented nor imposed anything. Its page on the zodiac is very clear, starting by specifying that astronomy and astrology should not be confused, that the first is a science and the other is not. Although these arts can intertwine, in this case nothing changes and the zodiac signs are set to stay the same.'

I'd love a reading from yu Susan. What do you charge, and how do I get one? Sophy, Sagitarrian -- only now Ophiuchus (December 12) (and 12 IS my lucky number)