How To Read Palms: Master This Art With Our Guide And Interpret Your Future

The lines on our hands are formed long before birth; in fact, they appeared way back in the second month of pregnancy. Throughout our lives, these lines are subject to change, according to the choices of each individual. When we die, it's said that these marking actually fade until they completely disappear... Your destiny is indeed inscribed in the palm of your hand, so discover what awaits you by interpreting what awaits you thanks to our guide on how to read palms.

What's palm reading and how did it originate?

On repeated occasions, the Bible would allude to the palm of one's hand. The origins of palmistry or palm reading are said to be in India, even though Aristotle, the Greek philosopher, wrote the first treatise on the subject. Despite this, it was during the Middle Ages that the reading of the lines of the hand was most widely practiced. Palmistry was at this time practiced in secret as it was forbidden by the church, yet remains common today.

Since the lines on our hands do not change regularly, it’s useless to have them read every fortnight! However, it should be known that palmistry has interested scientists since the 19th century. Francis Galton's work on dermatoglyphic studies laid the foundations for fingerprints being used by the police to identify criminals. As for 20th century doctors, some believe that certain diseases are announced in the palm of our hands...

Originally, palm reading refers to the study of the palm of the hand. However, the hand is also studied in its entirety. This is why today we also deal with what's known as chirology (the study of the hand) which looks at both hands.

🌟 Looking for True Love & Happiness? Connect with a Psychic for more insights.🌟 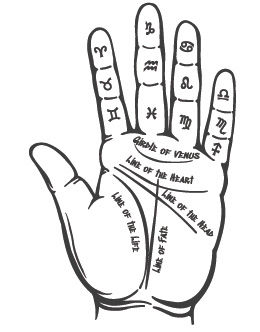 Before going into detail, you must first observe the shape of your hands (your 2 hands have the same shape, so only one is enough for this exercise, opt for the left hand). This will tell you which element your hand depends on.

How to read your palms in 4 steps

1) Identify the shape of your hand

There are 4 types of hand shapes; fire, earth, water and air; which correspond to the zodiac elements.

We've paired up hand shapes and the perfect professions for you. For example, if your hand is...:

Now that you know your hand shape, here are the character traits associated with you:

In order to read your palms properly, one must take into account all sorts of characteristics such as the suppleness of the palm and its temperature. Some people also look at the color of the veins that appear through the light, the length of the fingers in relation to each other. We also study each finger to learn more about its personality, character and maturity.

From now on, comparing your two hands is important because you may see differences. By the way, did you know that all your fingers are associated with a planet? Here are the correspondences: 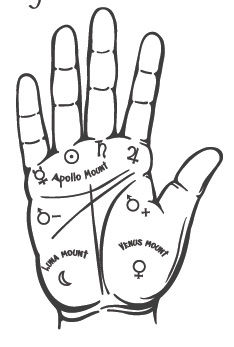 Each finger has a small bump under it called a mount. So the thumb dominates the Mount of Venus and so on. Once you have observed these mounts (the main mounts because there are others), you can move on to the lines.

You can now look at the lines on your palm and they will show you the main "lines" of your existence. You must compare your two hands because the lines can be very different. Some theories say that the left hand shows your potential and the right hand shows what actually happens, but this is just one opinion among many.

4. Do you have secondary lines?