What Does Each Moon Phase Represent? - The Meanings Revealed

The Moon cycle consists of the following phases; new and full Moon, plus the first quarter and third quarter, as well as the intermediate phases. Our expert Astrologer Susan Taylor explains the powerful influence it has on the Earth and mankind. As you probably know, from Earth, the Moon looks different over the period of a month. Sometimes we see it as round, while on other nights it looks more like a crescent. Its changing appearance is what we refer to as the different Lunar phases. Read Susan's insight on how these phases work and discover how they impact your emotions, mood, and state of mind.

Here, we are dealing with a very influential star, so much so, that the gravitational attraction of the Moon is at the origin of the tides. Now, since three-quarters of the human body is composed of water, it only seems logical that we too are impacted by the Moon’s phases. 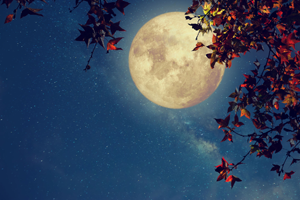 Over the period of a month, the Moon goes through 4 phases. Each phase has an impact on our emotions and state of mind.

>> Check out our Moon calendar for this year. <<

The phases of the Moon correspond to the different stages of growth of living beings. Years ago, farmers learned to plant and harvest their crops according to the lunar calendar. They adapted their work to these cycles to ensure their crops grew well. It is also possible to enjoy the benefits of the Moon on a personal level.

- Discover how the Full Moon affects each zodiac sign -

What are the 4 Moon phases? - Susan Taylor explains them

During the New Moon, the Sun, and the Moon merge and form a conjunction in the sky. Use this phase to open yourself up to new ideas and broaden your personal and professional horizons! The New Moon occurs when the Moon is positioned between the Earth and the Sun, meaning the three stars are then aligned. The entire illuminated part of the moon is at the back of the moon, the half we cannot see from the Earth.

If you look back on past events, you will find that all your successful deals started during a New Moon. This period is rich in dreams of love and glory that are worth following. Be attentive to your dreams at this particular time, because they may well guide you.

The Moon forms a 90° angle or a square with the Sun. The Moon looks very bright during this phase. The square formed by the Moon and the Sun stirs up some energies of resistance. On a practical level, this phase can encourage you to reorganize yourself and getting rid of old habits. It's a time for refining your strategy...

🌕 For more information, read about the Moon and its importance. 🌕

3) Full Moon: Your hard work from the New Moon will pay off

The Sun and the Moon are opposite each other or at 180° apart. The Moon also reflects all the light of the Sun. As a rule, emotions are heightened during the Full Moon. Avoid making rash decisions during this phase because your emotions will get the best of you. Many people resign from their positions or decide to break up during this cycle.

On a spiritual level, you must look within yourself and know where you stand. This is a time for revelations, intuition and premonitory dreams.

- Read about the all the Full Moons 2021 and learn about the Lunar nodes and how they influence you. -

4) Third quarter or Waning moon: Reap the rewards during this period

At this time in the sky, the Moon is darker and less visible. The Moon forms a 90° or square angle with the Sun again, but this phase is different from the first quarter. This phase occurs when the lunar star is positioned perpendicularly to the Earth-Sun axis.

In the third quarter, you logically enter a calmer period. You will become more aware of the revelations made during the Full Moon. The last quarter is the time when you have to accept certain situations and to forgive others. You are now ready to give up conflicts that no longer exist and make peace.

'If our view of the Moon changes, it's because it revolves around the Earth. Thus, its surface can be completely illuminated by the Sun's light (it is the full moon) or, on the contrary, completely in the Earth's shadow (it is the new moon).

It takes exactly 29 days, 12 hours and 44 minutes for the Moon to complete its cycle. This is called a synodic lunar revolution.

When the Moon is between the Earth and the Sun, we cannot see its lit face from the Earth. This is called the new moon. As the Moon revolves around the Earth, it will make a luminous crescent appear and gradually increase in size until it becomes a full disc of light, called the full moon. The Moon is then at the opposite side of the Sun with respect to the Earth.'

Why do we have eclipses?

The Moon's orbit around the Earth is elliptical and inclined with respect to the plane of the Earth's revolution around the Sun (the ecliptic). Most often, the Moon passes above or below the Earth-Sun axis. It sometimes happens that the lunar star crosses this axis during a New Moon or a Full Moon.

In the first case, our satellite hides the Sun from us. It is a solar eclipse, total, annular or partial eclipse of the Sun. In the second case, the Moon crosses the shadow of our planet and disappears momentarily, totally or partially: it is a lunar eclipse.

How To Attract A Capricorn Man: Our Astrology Experts Reveal The Top Secret  Capricorn men are faithful partners but how do you attract one?
Zodiac Signs: Dates + Personality Traits  Dates, traits, personality and compatibility.
Scorpio Personality  Scorpio no longer has any secrets to keep! We reveal everything!
I want to read on