Is The Eye Of Horus Magical? If So, What Is Its Power?

The eye of Horus is also known as the eye of Udjat. It is in fact a symbol of protection. Indeed, it derives from the legend stating that this eye was born from a fight in which Horus fought to avenge the murder of his father, Osiris. The Eye is thus considered to be a powerful protector, that one carries like an amulet, or even a talisman.

The legend of the eye of Horus

Horus is the son of Isis and Osiris. He is an Egyptian God, who is represented as a man with a hawk head. Horus is a fabulous being whose two eyes are depicted as the Sun and the Moon. It is his left eye, the one associated with the Moon, which was injured by Set, during the famous battle. The injured eye is reconstituted by Thoth, the lunar god. The eye of Horus is therefore also associated with the phases of the moon, which disappear and renew over and over again. 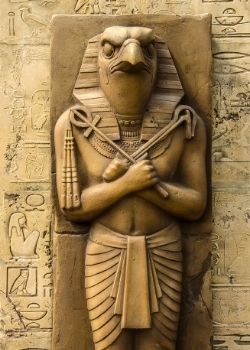 Horus, the falcon god, is one of the oldest Egyptian deities

This is an eye with magical powers

This magical element prevents the onset or spread of disease, but it also offers the ability to see. In many Mediterranean countries it is painted on the prow of boats to allow sailors to stay on course and to see the path to follow. It is important to note that it is also associated with the Third Eye and the sixth chakra which is linked to intuition and extrasensory perceptions, such as clairvoyance. It blesses us with the gift of seeing what is usually hidden.

It acts as a symbol of protection

Let us recall that the eye of Horus is also called the eye of Udjat. Udjat means "to preserve oneself". It is therefore found on many amulets for protection, as well as to ward off bad luck. It is traditionally worn around the neck to protect one's health, but you can however also install one at home or in your car, with the idea of being looked over.

The eye of Horus and the eye of Ra

The eye of Horus is a hybrid of a human eye and the eye of a falcon, which explains why it looks very much like the eye of Ra. However, it is associated with the moon whereas the eye of Ra is linked to the sun. Ra's vision is omniscient and therefore unlimited, while Horus' vision is be more focused on physical protection.

>>> Did you know that Horus is also one of the signs of Egyptian astrology? Find out whether or not he is your sign and what he has to offer you.