How To Read And Interpret The Cross Tarot Spread

In order to interpret Tarot cards, keep in mind that you need to know the meaning of each individual arcana. Also, depending on their position, each card may have a different meaning. Our expert fortune-tellers explain how to interpret a spread by using the cross method.

In this method of laying the cards of the Tarot Marseille, only the 22 Major Arcana are used in order to give us an immediate and clear answer.

There are four steps to keep in mind when you want to proceed with using the cross method. 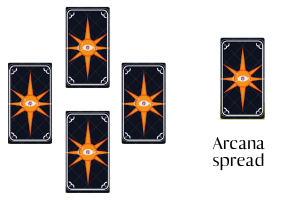 How to lay out and set up the cross spread

How to read your Tarot cards using the cross method. Each of the five Arcana has a precise meaning and represents a stage in your life. Here is how to interpret the Tarot with the cross method.

1) First step: Start with the question

The Arcane of synthesis, the fifth arcane is the result of the sum of the four arcane. This chart is analyzed first. During this first phase, the Arcane of synthesis invites you to return to the choice of the question, to reformulate it if you realize that it is not clear or precise.

2) Second stage: You now, in the present

The first Arcane of the deck (top card), helps you to have a clearer idea of your state of mind in the present. It also helps reveal your fears, uncertainties and desires.

According to Tarot card draw (the card on the left), pushes you to take into account external factors that may interfere and affect the situation or problem under consideration. For example, if several people are involved, it’s this Arcane that represents them.

4) Fourth step: The consequences of your actions

Third Arcane of the Spread (bottom card), helps you understand whether your actions from both past or present, are well suited to the situation and the people involved.

Fourth Arcane of the draw (card on the right): in the cross method, we don’t talk about conclusions. On the contrary, this fourth arcane shows you the probable, and not certain, evolution of the situation examined. 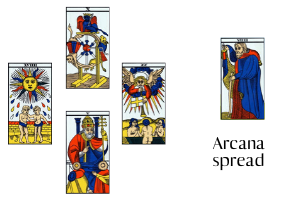 My mystery synthesis is 9, the Hermit.

How did we come to this result? Simply by doing two operations: adding up the numbers corresponding to the 4 arcana of the spread.

Since 54 is greater than 22 (which is the maximum number of Major Arcana in the deck), we proceed to the sum of the two numbers that make up the result found.

9 is the number that corresponds to the Arcanum of the Hermit.

Remember that if the number found by the sum of the 4 arcana is less than or equal to 22, the second operation is not necessary.

If the arcane of synthesis is already present in the draft, this card will have a double valence.

Now that you know how to use the cross method, discover all of our articles in the section of the card: 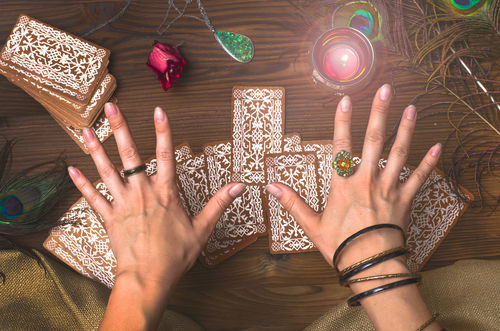 2022 Tarot Card Reading For Each Month  Discover the theme of each month here.
The Art Of The Tarot  Pick your cards!
How should you choose your tarot cards?  Everything you'll need to know about your tarot cards!
What are the different Tarot cards?   There are numerous tarot cards out there, find out what they are now!
The Most Positive Cards In The Belline Oracle  Discover them here and their meaning!
Belline Oracle  Everything you need to know!
How To Read And Interpret The Cross Tarot Spread  Amy Thomas explains how.
Tarot: Look Into Your Future With A Tarot Reading  Consult a Tarot reader today!
Tarot Of Marseille  Its Best-Kept Secrets Revealed
Amy Thomas, Head Tarot Reader At My.Astrofame  Learn more about her, here!
I want to learn more about psychics