Nostradamus 2022: 9 Chilling Things He Predicted For This Year

Nostradamus is renowned for the accuracy of his age-old predictions. His forecasts are prophecies and are said to announce huge worldwide changes that will impact the global population. If you are curious about what he predicted for this year, you are in the right place! Be prepared to discover some troubling events that are set to take the world by storm and revolutionize our lives. Strap in tight, because we're about to make some troubling discoveries for 2022.

His real name was Michael de Nôtre-Dame, and he was a French doctor and astrologer. He contributed his knowledge during the plague, famous for his prophecies in which he anticipated the future of humanity until the end of the world. Interestingly enough, he predicted the end of the world to come about in the year, 3797. He perhaps most famously also predicted the attack on the Twin Towers. For centuries and right up until nowadays, his prophecies are studied around the world and announce the events that are to come. 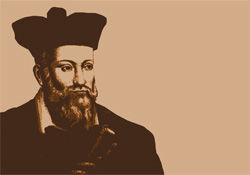 We hate to break it to you, but Nostradamus' predictions for 2022 aren't very positive. Indeed, he foresaw a series of natural disasters, diseases, attacks and floods for 2022.

1) The US dollar will collapse

According to his predictions, by 2022 inflation will be out of control and the US dollar will collapse. Plus, gold, silver, and bitcoin will be seen as assets worth investing more money in.

Nostradamus had a vision of many natural disasters, with the appearance of new epidemics and great famines. This is without taking into account the Coronavirus epidemic... For Nostradamus, all this is only the beginning of the catastrophes to come. Several countries will be declared in a state of famine.

3) A devastating nuclear bomb will explode

According to Nostradamus' predictions for the year 2022, a nuclear bomb will explode and produce climatic changes and changes in the position of the earth in the sky.

4) Global warming at its peak

Nostradamus has written that "the king will cover the forests, the sky will open, and the fields will be burned by the heat". A prediction that could herald the destruction of the Amazon rainforest and the expansion of the ozone layer, further exposing the earth to the sun's rays due to climate change.

5) The death of an important and influential political leader

Nostradamus assured, according to experts, that an important and influential political leader would lose his life this year. Of course, there are countless prominent figures in today's political scene. However, some dare to point out two of the most talked-about personalities: Kim Jong-un, leader of North Korea, and Vladimir Putin, who apparently according to this vision could suffer fatal accidents.

He also foresaw many natural disasters such as floods, droughts, and earthquakes... but he also predicted solar storms for 2022.  "We will see the waters rise and the earth collapse in on itself."

7) The end of the European Union

This bad news is announced in the eighth quatrain of the second century: The sacred temples of Roman-style / will reject the foundations of the Gothic. Let us remember that the Treaty of Rome, ratified in 1957, is at the origin of European construction. According to Nostradamus, Brexit is only the beginning, and the entire European Union is destined to collapse in 2022.

8) The rise of artificial intelligence

This technology, in which many scientists are interested, is a cause for concern. For the seer, artificial intelligence would not be beneficial to humanity, but quite the opposite. According to the interpretations of Nostradamus' analysts, Artificial Intelligence could take power over those who employ it. And the risks of the latter are also scientifically established.

9) A shower of asteroids will destroy the Earth

"A great fire will fall from the sky for three nights. The cause will seem awesome and marvelous; soon after there will be an earthquake."

The above quatrain indicates that a meteor shower is about to fall on the planet. If a large enough rock falls into the ocean, it could cause giant tidal waves that would engulf the land and cause great damage. An earthquake would also trigger tsunamis, and untold damage could result from rising water.

- Now that you know what Nostradamus has seen for this year, consult your horoscope 2022 for even more insights. You might also like: Baba Vanga Predictions: What's Ahead For 2022? -

"For forty years...the rainbow will be seen". We will continue to read Nostradamus predictions for the next forty years

I WANT TO LIVE. how can we stop this

I'M PANIKING. I'M GONNA BE 12 SOON. I DONT WANT THE WORLD TO END, I'M TOO YOUNG TO DEMISE.

People will live on and you can be one of these people. Believe and think positive thoughts. Literally imagine a positive future. This world is never only good or bad.. your experience is determined by which of both you choose to focus on.

WHO AM i TO ARGUE WITH SOME ONE LIKE THIS,