Be Dazzled By The Properties, Virtues and Meaning Of The Precious Amethyst Stone

The Amethyst stone has been known and used since antiquity. It’s a quartz stone and is crystal colored by iron oxide. Indeed, it was often used in jewelry in ancient Egypt. It is a noble and elegant stone and its name however evokes the drunkenness against which it is supposed to fight. Read up on its history, virtues and meaning here.

Precious and semi-precious stones have amazing powers and the amethyst is no exception. Discover this stone’s fascinating powers for a better understanding of why it is so sort after.

What are the origins of Amethyst?

In the literal sense, amethyst means "who is not drunk". Indeed, its name comes from the Greek methystos "drunkenness" (the preceding "a" is a privative).

It is probably because of its beautiful red wine color that, in ancient times, this precious stone was attributed the power to preserve men from drunkenness or to cure alcoholics. The Greeks drank from cups made of amethyst to protect themselves from the effects of alcohol. 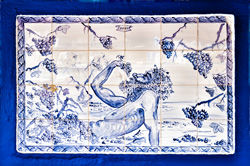 Legend has it that Dionysus, (god of the vine, wine and excesses), was in a state of great anger one day and was determined to attack the first human he came across. Fate designated the young Amethyst on whom the god threw tigers. She was narrowly saved by Artemis; the goddess of hunting, who transformed her into a statue of pure quartz. Later Dionysus, overcome with remorse and sorrow, dropped his cup of wine, which splashed on the statue and stained it purple.

It's also known as the Bishops' Stone

As a stone of humility, temperance, nobility of heart, and moral purity, the amethyst also represents authority, especially ecclesiastical authority. It is said that Saint Valentine wore an amethyst around his neck, just like the knights who went on crusades with this gemstone in a rosary. 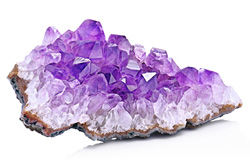 In the Middle Ages, it adorned the papal rings and crowns of Christian kings, who had to keep their minds clear, and preserve themselves from the intoxication of alcohol or power!  Worn by the bishop Saint Valentine, the amethyst symbolizes purity, tenderness and mutual respect, which is why it is traditionally offered for a 48th wedding anniversary.

By heating it strongly, this stone becomes yellow and some tricksters take advantage of this to pass it off as Citrine…

It is possible to heal oneself with gemstones. According to its legend, amethyst has many virtues, it is used to fight:

This astonishing stone also has great power at the psychic level. It encourages us to refocus emotionally and is traditionally used to:

How can you recharge the energies of this stone?

To recharge it, expose it to the light of the moon, if possible, at the time of the new moon for more efficiency.

Be aware that you can remove its energies simply by passing it under running water or by immersing it in salt water. Avoid recharging it in sunlight as it could lose its beautiful color. On the other hand, if you wish to purify it, it is well done in sunlight, just avoid exposing it too long ...

An important point to know:

It can recharge itself and/or purify other stones.