Otter Is Aquarius' Spirit Animal; Discover What It Symbolizes

The Otter has always fascinated us because of its duality between land and water, indeed, this animal is well known for flitting between solitary and sociability. This seemingly wacky creature's behavior may not always be understood due to its whimsical side that we find in the natives of the Aquarius zodiac sign. Discover the symbolism of the Otter here and learn more about this astonishing totem animal, plus what it has to offer you!

The Otter behaves like no other animal and has always inspired the Amerindians. For them, it represents the incarnation of femininity, because it is long, slender but also coquettish. Have you identified your spirit animal? Use our guide to do so and discover more facts about yours.

What are the origins of the Otter?

It is not surprising that the otter is associated with the sign of Aquarius, as its link with water is so strong. It has many points in common with this sign, in particular a very pronounced taste for independence. Indeed, the Otter is sociable and often lives in a group setting, yet is in fact self-sufficient and lives with his fellow men only for sociable reasons and not by necessity. 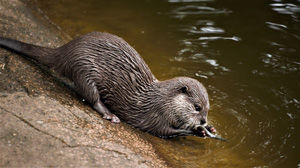 Following the example of the Woodpecker who lives only for its family, the Otter tends to prefer freedom. This point could explain why the idea of getting married represents for them a kind of prison and infringement of liberty.

Symbolism of the Otter: Joy and helpfulness

For the Amerindians the Otter symbolizes joy and helpfulness because it is not aggressive. Indeed, being neither belligerent nor territorial, it is also, a symbol of peace, kindness and detachment from material goods.

As for its amphibious character, it fascinated the Amerindians who situated it between two worlds, that of the Earth and that of the Waters. Symbol of a balance between freedom (earth) and deep emotions (water).

What powers does the Otter bestow on you?

If the Otter is your totem animal then its link to water allows you to follow the course of life by adapting easily to all the circumstances you encounter. Its intelligence and ability to grasp everything that happens in its environment also gives you the ability to read non-verbal signs. Like a sixth sense that would allow you to read the thoughts of those around you.

What does it mean if you dream of an Otter?

Dreaming of an Otter is generally a good omen for love. This dream promises you a happy, serene, sincere and lasting marriage. On the other hand, if you dream that an otter attacks you, it indicates that someone is trying to exploit and rip you off.