When one wishes to try the divinatory tarot, it is essential to choose the right deck of cards. According to your affinities and the question asked, some decks will prove to be more indicated than others. There are a multitude of decks to predict the future and each of them has its own characteristics. Discover the most common ones in our special file and learn what makes them so special.

This deck includes 78 cards and can be identified thanks to the “Middle Age” design and symbol of important secrets. Ancient Tarot cards have a white background and use very simple colors such as blue, red, black, beige, green, and yellow. The major cards all have a title and a number except Arcane number 13 (Death) and the Fool, who isn’t usually numbered. As for the minor cards, they consist of Champagne Glasses, Coins, Staffs, and Swords.

Among this type of game, we will note:

➡️ Want to enjoy a free Tarot reading? Try out the Tarot of Marseille too.

🌟 Discover your destiny with the help of a Tarot reader! All readings are 100% risk free, confidential and anonymous.🌟

Modern Tarot also count 78 cards, but their design is noticeably different and doesn’t always comply with the same code. The designation for the major cards is sometimes different to those used with the classic tarot, and the Fool is sometimes numbered. The minor cards are generally the same except that the Coins take the name of Disc. 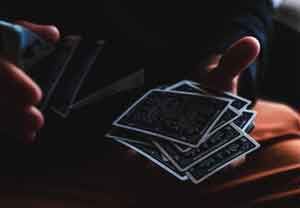 The Thoth tarot (Aleister Crowley), Licorne tarot, and the tarots of Maddonni perfectly illustrate the modern Tarot cards, though there are a lot more decks that are a good example, too.

There’s one deck with 78 classical cards which is inspired by the traditional tarot cards and is equally different in how it’s played. The 78 cards are numbered 1-78 and the major and minor cards are mixed up with each other.

The best example of this tarot would be the Egyptian Tarot.

Classic Playing Cards are decks that consist of 32 or 52 cards which are used in games like Belote, War, Bridge, etc. The Ace to the King (52 cards), the 7 to the King (32 cards) and the 4 symbols (Spades, Hearts, Diamonds, and Clubs) are what distinguishes these cards. The King, Queen, and Jack are prominent and play an important role in every game.

Inspired by classic playing cards, the appearance of these cards is modified to facilitate the use of cards when used by a clairvoyant. They’re made up of 32, 36, or 56 cards and are divided up in 4 series of colors (by Spades, Hearts, Diamonds, and Clubs). You’ll find the Petit Lenormand among these decks.

The Oracle of Belline could be a perfect example of this type of card. The oracle doesn’t follow the Tarot nor does it have the same structure of classical tarot or card games.

Tarots or clairvoyant practices on paper

Some clairvoyant practices have been written and transposed on paper and are also called tarots, even though they don’t have any cards. Among the collection of written tarots, you’ll find the famous Yi-King, the oriental tarot of Paul Iki.

If you've enjoyed this articles, check out:

This is very good information for us. This is interesting and impressive article. Please keep it up.Please visitTAROT CARD READINGS IN SCOTTSDALE.

What are the best cards for beginners for tarot readers

2022 Tarot Card Reading For Each Month  Discover the theme of each month here.
The Art Of The Tarot  Pick your cards!
How should you choose your tarot cards?  Everything you'll need to know about your tarot cards!
What are the different Tarot cards?   There are numerous tarot cards out there, find out what they are now!
The Most Positive Cards In The Belline Oracle  Discover them here and their meaning!
Belline Oracle  Everything you need to know!
How To Read And Interpret The Cross Tarot Spread  Amy Thomas explains how.
Tarot: Look Into Your Future With A Tarot Reading  Consult a Tarot reader today!
Tarot Of Marseille  Its Best-Kept Secrets Revealed
Amy Thomas, Head Tarot Reader At My.Astrofame  Learn more about her, here!
I want to learn more about psychics