If you were born between October 29 and November 2, your guardian angel is Yelaiah, meaning "Eternal God". Under the sign of Cancer, this female angel is linked to courage and victory. She helps her natives to develop dynamism and encourages them to follow the path of justice and righteousness. Her natives like to travel to learn, plus they distinguish themselves by their multiple talents and their bravery. Deelve into Yelaiah's qualities and learn how you can call on her for help and guidance.

Yelaiah brings divine justice and gives her natives the keys to better understand the boundaries and limits of the universe. Indeed, she is the spiritual guide of those who seek her. She is a powerful angel who develops bravery and dynamism in her followers. She helps you get to victory.

*The sefirots are the ten creative powers of the Kabbale. They present themselves in the form of the tree of Kabbalah, where each Sefirot is an emanation of the energy of God the Creator.

Yelahiah is a female angel symbolizing victory. She encourages bravery and dynamism, and supports businesses that operate justly and correctly. People born under Yelahiah’s protection often like to travel and expand their horizons. They are courageous people who stick to the choices they make. She gives her followers the strength to make peace and to have the confidence of their superiors. She leads you to the path of righteousness, courage and sincerity. Indeed, Yelaiah makes you honest and loyal people, who love to make peace, plus she gives you the assets to go on the quest for success.

Yelahiah will be a great help if you want to transform your violence into strength, and look for ways of reconciling with others. This guardian angel can help you improve your ability to listen to others. Yelahiah is associated with Karma and will help you out when you need to correct a mistake you aren’t proud of or an event from your past. 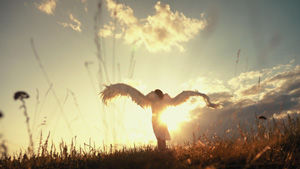 Yelahiah can also protect you from aggression if you find yourself in a tense environment.

Prayer for communicating with Yelahiah

Yelahiah’s days and regency hours are 4th May, 18th July, 1st October, 12th December and 20th February between 14:20 and 14:40.
To communicate with your guardian angel, say this prayer with nutmeg incense:

Your guardian angel may try to get in contact with you through Angel numbers, don’t wait to find out. Learn everything about the influence of guardian angels.

How and when can communicate with my gaudian angel yelaiah?

WOW! LOVE IT! RESONATES COMPLETELY. She has definitely been reaching out to me! This was my final confirmation, thank you so much for this read❤️

Since Angel Yehaliah appeared in my life being sent by God himself that night answering my prayers & I started praying bonding with her, my life began to change drasticly improving better till now.