Topaz: The Meanings, Origins And Powers Of This Gemstone

Topaz or "golden magnet" as it is known in Brazil is a so-called pleochroic stone, meaning its color changes depending on the angle from which it is viewed. Whether it’s golden yellow, pale blue, or green, it symbolizes faith, honesty, purity, and loyalty. You will know everything about its origins and its virtues.

Precious and semi-precious stones, of which topaz is one, have been used since antiquity for their numerous properties on our mental and physical state. Here are all the secrets related to topaz.

What are the origins of topaz?

The name topaz comes from the Greek "topazus" "topazion" or "topazon". The word was said to be derived from an African dialect spoken by ancient people still unknown until today.

According to the legend of Pliny the Elder, the discovery of topaz dates back to the first century on the island of St. John off the Egyptian coast. This foggy island was infested with snakes that were the guardians of topaz. The famous precious stone gave the island a fairy-like brightness that defied the night and its darkness.

The virtues and therapeutic powers of topaz in lithotherapy

The effects of topaz vary according to its color. It is up to you to choose the one that suits you best.

The mystical properties of topaz

Topaz was the stone of the nobility because according to legend it brought wealth, prosperity, glory, and the recognition of one’s peers. It was reputed to bring treasures. Faced with the unknown, the gemstone gives self-confidence and allows one to meet any challenge.

The virtues of topaz on health

Thanks to their extraordinary powers, gemstones are used in lithotherapy to treat certain diseases. 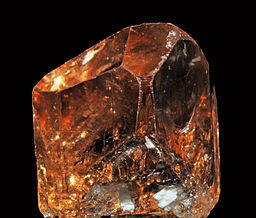 According to the legend, topaz was mainly used to treat eye diseases. If a person started to lose their vision, they had to put the topaz stone in wine for three days and three nights. In the evening, at bedtime, the patient had to touch their eyes with the dripping topaz stone in order for the liquid to penetrate. After a few days, the patient regained perfect vision.

Today, we know that topaz does not act in the same way depending on its color. The blue topaz acts on:

The pink topaz favors love relationships, developing charm and tenderness, while the green topaz, rarer, acts on the dysfunctions of the heart.

How to purify and recharge a topaz?

To purify your stone, immerse it in non-calcareous water for several hours and recharge it by exposing it to the moon's rays. Remember not to expose your stone to strong light sources, as this may cause the color to fade. And also discover all the characteristics of onyx and amethyst.