Aztec Astrology: Discover This Ancient Practice And Its Calendars

The Aztecs, just like the Mayans, used three distinct calendars, which led to a very complex form of astrology being formed. This art associates a sign of the day, a sign of the month and a sign of the year! Thanks to 3 ancient calendars, this form of astrology describes your personality and character traits with great precision. According to Aztec beliefs, every individual is protected by a God since birth. It is the day of birth that determines someone's character, talents and future. These Gods are the representation of nature, where we find animals and elements of life.

The origins of Aztec astrology

Aztec astrology, as its name suggests, comes to us from an ancient South American tribe: the Aztecs, who were particularly fond of astronomy and astrology. Their study of the celestial bodies gave birth to this very precise but also colourful form of astrology, which is based on their own beliefs of the time...

Aztec astrology is a complex science that uses 3 different calendars:

This system defines periods of 13 days (in the manner of our weeks), to which 20 signs are associated (20 x 13 = 260). Each day is therefore designated by the association of a sign, or glyph, and a figure between 1 and 13, which in turn is associated with a divinity. Certain days can be considered as beneficial or harmful according to the number with which they are associated. This calendar serves to predict the future and the destiny of each one according to his or her day of birth.

Xiuitl, a solar calendar of 365 days

The days are grouped, not in 12 lunar months, but in 18 months of 20 days, to which are added 5 days in which the god Nemomtoni or Nemotemi is worshipped. On the twentieth day of each month, and therefore 18 times a year, are celebrated their festivals, during which they proceed to human sacrifices for the salvation of the Earth, according to Aztec belief.

Ximolpilli or the Aztec Century

These calendars are in turn part of a longer cycle of 52 years, called Ximolpilli or the Aztec Century, divided into four periods of 13 years, corresponding to the 13 periods of the divinatory calendar. Each of these periods is associated with a figure and a sign, from among the following: Acatl (reed), Tecpatl (flint), Calli (house), Tochtli (rabbit). Because of this cycle, two people born on the same day 52 years apart will have the same sign. 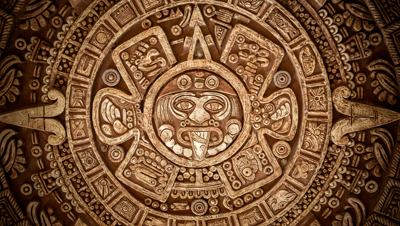 This agreement of the number and the sign the 52 years is called the "League of the years", moment in which the Aztecs celebrate the Festival of the New Fire.

The fact that a man who reaches the age of 52 officially enters old age is also noteworthy, it's a symbol of respect and the reason why he is relieved of many obligations such as paying for his rights. His judgment is taken into account, and at that moment he is allowed to drink pulque, a fermented drink based on pita.

Due to this system, each person is attributed three signs

A day sign, which describes the person in their routine, behavior, mood or intimate nature. It takes precedence over the other signs.

A sign of Treizain, which acts as a protection. Less important than the preceding one, but whose action can allow the personality to be balanced.

An annual sign, which provides all the information about the influences that society has on the individual.

The three signs in a set speak to us about the fortune that a person can expect throughout his life.

Correlations between the Aztec calendar and our current calendar

The Aztec calendar is therefore more accurate in measuring time than the system we use today.

The 20 signs of the divinity calendar

The signs are each associated with a direction.

The Months of the Solar Calendar

Técpatl is rather referring to obsidian than flint; I´d say.