Opal: A Bewitching And Soothing Stone

Over 4000 years ago, opal was used to decorate many objects, and today, it has not lost any of its beauty. We no longer count the colors contained in this mineral, and its soothing powers amaze many of its users. This stone contains the colors of the rainbow and deserves all of our attention. Susan Taylor reveals its origins, the legends surrounding it, as well as the meaning and virtues of opal.

Precious and semi-precious gemstones all have amazing powers, in addition to their beautiful appearance. Opal, the stone with the colors of the rainbow, has never ceased to be coveted. At the time, Cleopatra would have liked to make a jewel out of it, and nowadays, people still use it to gain vitality and soothe their ailments. It is now your turn to discover its bewitching and soothing qualities.

Origins and deposits of opal

Although it has been mined for over 10,000 years in the Virgin Valley in North America, its discovery is dated to 4000 BC. Indeed, archaeologists have found objects decorated with opal from Ethiopia in a cave in Kenya, they were dated back to that time.

Millions of years later, opal was identified in Australia in 1849. It was then lodged in the layers of sandy clays. Opal production began 50 years later in what is now New South Wales and Queensland.

Today, 75% of opals come from the Coober Pedy fields and these fields extend over 70 kilometers! For opal to form, there must be alternating dry and wet periods, the local climate is more than suitable. The main deposits have therefore mainly been identified on the Oceanic and American continents.

Concerning its aspect, it is quite surprising. Two opal stones can be totally different even though they come from the same deposit. Their iridescent reflections are never the same, which is why there are many kinds of opals. 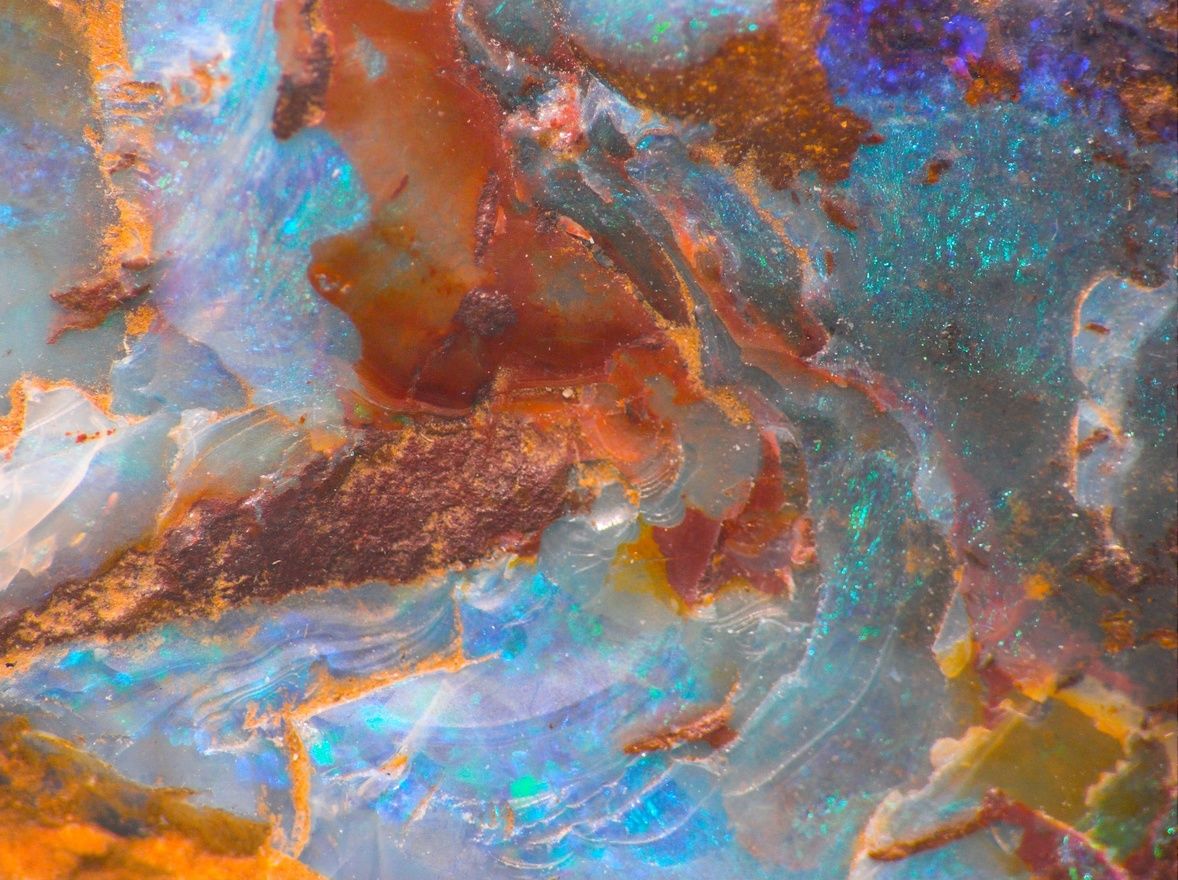 From the Sanskrit "Upala" meaning "precious stone", the Latin derived the name Opalus, the Greek that of Opallios, and assigned the meaning "to see a change in color".

A stone of legend, born of the sky and the gods

Throughout the ages and cultures, the opal stone has never ceased to fascinate those who crossed its path. Its beauty and virtues have earned it a place of choice in many legends:

It is first associated with meteorological phenomena, thanks to its, or rather its, many colors. Thus, in India it was said that the goddess of the rainbow would have metamorphosed into opal to escape her many suitors, subjugated by her beauty.

Then in Arab cultures, it is said that if the opal is so bright, it is because it contains lightning in its rock.

It is of course found in Greek mythology. The stone would have been born in the eyes of the king of the gods Zeus: his tears of joy following the triumph against the Titans would have been transformed into opal in contact with the ground. Since that day, the Greeks attribute to it powers of clairvoyance and prophecy.

Finally, for the Romans, it symbolized the hope and the purity. According to history, they were the first to market it, thus arousing envy: Marc Antony would have banished a senator who refused to sell him an opal intended for Cleopatra, estimated today at $60 000.

The most poetic of legends was told by Australian aboriginal groups. According to their beliefs, the Creator God came down to Earth one day on a rainbow. The moment he stepped on the ground, all the stones began to sparkle. The opal stone was born.

Opal, a stone that is both soothing and invigorating

Thanks to lithotherapy, it is possible to heal oneself with precious stones. According to its legend, the opal has many virtues, you can in turn use it, see how:

Its virtues on the physical level:

Its benefits on the emotional level:

How can one recharge this stone?

To purify and recharge your opal stone, use a bath of distilled water, but definitely no salt. Place it under the light of the moon for a gentle recharging, or in the sun to give it strength, brilliance and luminosity.

⚠ Be careful, however, not to leave it in too dry a place: this could dehydrate it, or even split it. ⚠

► You now know more about the amazing opal stone. But this stone, symbol of purity and love, is not the only one that deserves your attention. Go without further delay to the discovery of Amethyst, the ideal stone to fight against addictions!