Halloween is a holiday that children and adults, alike, really enjoy. And what’s not to love? It’s the perfect time to dress up in scary costumes and eat bucket loads of candy. Although, something mystical surrounds the date of October, 31... Our psychic Susan Taylor is here to share some of the biggest Halloween traditions and reveals a very powerful love ritual, that you ought to try right away.

Witches are always depicted with a cape, a pointy hat, and riding a broom, but where does this image come from? Susan Taylor lifts the veil for us on the witches' accessories and exclusively reveals one of her rituals to reveal the first letter of your soulmate’s name.

Want to find out more about your future?

This is a very simple and fun ritual! To perform it, you’ll need:

Then, close your eyes, concentrate, and think intensely about the love that will come. Blow on the apple peel and throw it into the water. You will see the peel transform and take the shape of a letter. This letter will be the first letter of your perfect other half’s name...

Why are witches' hats pointed?

Their shape definitely isn’t random! Their hat is pointed because it channels energies, both good and bad, in order to better focus on oneself and concentrate. In short, it acts a bit like a lightning rod.

Where does the tradition of the broom come from?

Over the years, witches have been imagined riding broomsticks, but at the beginning, the broom had a spiritual meaning. The expression "to sweep" is used literally as well as figuratively, and in the case of our witches, it was used to chase away evil spirits. So, to drive evil out of your house, sweep from east to west.

What about pumpkins? Where does this funny tradition come from that consists in transforming them into monsters? 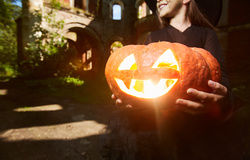 In addition to being funny to look at, the idea of putting a pumpkin in front of your house was used to divert evil spirits and prevent them from entering your house.

We often see an apple cut in half in movies or series, what is it used for? 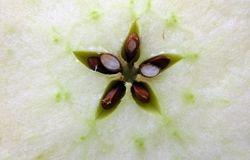 When it comes to an apple cut in two, the inside of the apple represents the pentagram, on which a laurel leaf is placed to block the evil.

The Properties And Virtues Of Each Gemstone  Which stone should you opt for?
Turquoise Gemstone  The Ultimate Anti-Depressant
Mirror Hour 19:19  Think Before You Act
What Your Sneezes Mean  What your nose is trying to say to you.
15:15 Mirror Hour Meaning  Passion awaits you…
Mirror Hour 18:18  Prosperity Is Yours!
08:08 Mirror Hour  Time For Change
09:09 Mirror Hour  The Best Is Yet To Come
Mirror Hour 20:20 Meaning  Take Your Time
Who Is Amenadiel?  Is He The First Angel God Created?
I want to learn more about psychics